It’s been in the seventies lately. Although it was in the eighties, lower nineties a few days ago. Hot. Hot for me anyway. I like the seventies and wish it would stay this temp all year-round but well… I’ve been working on genealogy this morning and discovered one of my family line that went out west was in the Fiddler’s Hall of Fame. It’s interesting the tidbits you learn, like one of my mom’s ancestors (her great-grandmother) was kidnapped by the rumored-to-be Cherokees and then when she returned home was shunned although the daughter she brought back with her wasn’t. My great-grandmother on my mother’s side was also full Cherokee. We have a tin pic of her. I also had an ancestor here in OH that knew Brigham Young. He knew a lot about the history of Mormons here in Kirtland, OH. He was a Justice of the Peace. Another ancestor is in the history books as one of the first settlers in the area of Russell, OH. He donated land for a church and the first meeting place. He later owned a hotel that used to be a stagecoach route in the early days of OH.

I’ve bought my website here on WP but I’m still figuring out how to change the name to just tracikenworth.com. I own the domain name so I just have to transfer it. Godaddy was too expensive for me for the website it was $143.64 for 36 months while WP is $48 plus Jetpack is included so I don’t have to pay separate for that. So far, it’s pretty much like what I had, I’m just going to do a few changes. I’ll need to figure out how to check it on my cellphone too to see if it looks right that way. So much to figure.

Once again, I’ve read some things about traditional publishing that makes me wonder if it’s all not just a popularity thing. I’m going to do more research into it but I may also start trying to teach myself how to go Indie. I like that I’d be on my own schedule, that I can write what I want, that I retain all the rights. The problem is still money, so I have to learn a lot if I go that route. I was leaning toward traditional because the YA that I write is bought through print and they mostly go for the traditional market. Lots of decisions to make! And I started editing from the beta I got back! I’m re-working the opening somewhat. I want to be able to show her in the real world before the stuff starts happening. Nothing boring hopefully but just a glimpse of a day for her.

Also: some pics of the cats: 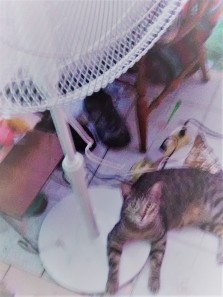 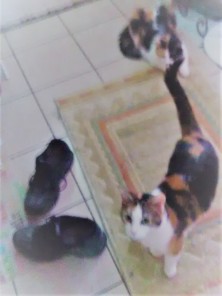 The first is Snowball, the second is Mr. Midnight, the third and fourth are the sisters, Miss Callie in the back and Miss Priss in the front. Terrible pics. Wish my phone camera was better but it’s the best I can do right now.